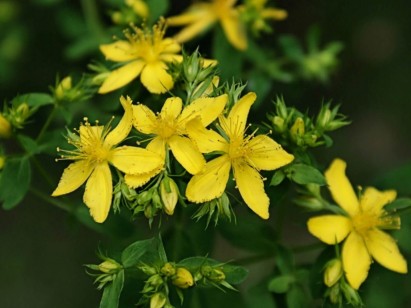 Characteristics: St. John’s wort is a popular medicinal herb native to Europe and produces bright five-petaled yellow flowers (Benzie, 2011). The name comes from its flowering around St John’s Day (24th June). The Latin name Hypericum is derived from the Greek words hyper (above) and eikon (picture), in referral to the tradition of hanging plants over religious icons in the home during St. John’s Day to ward off evil.

History: The medical usage of St. John’s wort can be dated back to the ancient Greeks (Castleman, 2001). The Greek physician Pedanius Dioscorides (40–90 AD) recommended it externally for burns and internally as a diuretic, treatment for sciatica, and malaria. The Greeks and Romans believed that St. John’s wort protected them against evil spells and the Christians adopted this belief, burning the herb on bonfires to drive away evil. It continued to be used by herbalists in the 16th century and John Gerard (1545–1612) recommended it as a ‘remedy for deepe wounds’. America’s 19th century physicians, the Eclectics, considered St. John’s wort to have ‘undoubted power over the nervous and spinal cord’. It has become well known as an anti-depressant through scientific experimentation although traditionally was not really used in this way.

Current applications: St. John’s wort is one of the great tonic herbs of traditional Western herbalism and is particuarly suited to treating nerve pain and anxiety. David Hoffman in Holistic Herbal points out St. John’s wort has a sedative and pain reducing effect, which gives it a place in the treatment of neuralgia, anxiety, tension (Hoffman, 1988). He also mentions it will ease sciatica and rheumatic pains. It may be useful in carpal tunnel syndrome, head trauma injury, vulvodynia, peripheral neuropathy, phantom limb pain, and in other nerve injuries. David Winston recommends it for mild to moderate depression along with a sour stomach (Winston, 2007). It may be combined with lemon balm for a stronger mood elevating effect. Combines particularly well with the American skullcap as a nervine tonic.

Science: St. John’s wort is rich in flavonoids, compounds with anti-oxidant activity (Zou et al., 2004), and compounds such as hypericin which are anti-inflammatory (Sosa et al., 2007). Hyperforin is thought to be the major compound in St. John’s wort responsible for its anti-depressant affects and it may inhibit serotonin reuptake (Chatterjee et al., 1998). St. John’s wort has been well studied for treating depression, mainly in Europe, and the quality of the studies is often high (Szegedi et al., 2004; Laakmann et al., 1998; Woelk et al., 2000). However, the consistency of results is variable, this is likely due to variable hyperforin content of the hypericum extracts, differing doses, and clinical heterogeneity (Laakmann et al., 1998). However, the number of large, well-controlled studies with positive results against either anti-depressants or a placebo is very convincing. Studies also find St. John’s wort to be better tolerated than conventional drugs (Woelk et al., 2000).

Safety: High, but only when observing contradictions. St. John’s wort may interact with other anti-depressants (particularly the SSRIs) and enhance their effects potentially leading to serotonin syndrome (Dannawi et al., 2002).

St. John’s wort may increase sun sensitivity (Bove et al., 1998), so while taking St. John’s wort be very cautious about exposure to direct sunlight as you may get sun burnt much more easily.

St John’s wort should not be used at the same time as the drugs warfarin, digoxin, cyclosporine, indinavir and related anti-HIV drugs. Do not recommend using St John’s wort to a woman who using the contraceptive pill to prevent pregnancy.

Form: The fresh tincture is the preferred form by herbalists, look for a deep red colour.

Polyneuropathy: A study (n = 54, double blind placebo controlled) where patients took hypericum extract three times daily, each containing 900μg total hypericin, was not statistically significant for treating polyneuropathy. However, there was a clear trend towards reduced pain in the hypericum treated group compared to placebo (p = 0.05). While various p values in this study were not strongly significant, the trend was always in favour of St. John’s wort extract versus the placebo. By my calculation the dose used here was on the low side. Maximum studied doses for depression are 1800 mg/day hypericum extract which translates to 2160ug/day to 5040ug/day hypericin (Szegedi et al., 2005). The experiment requires repeating with a higher dose, or preferably, using a fresh tincture.